Bromidic Humor from the Inventor of the Blurb 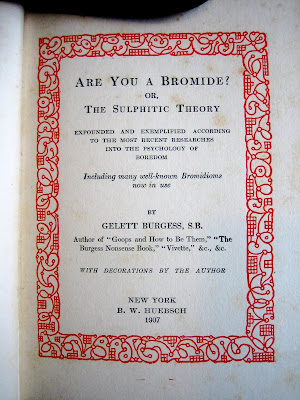 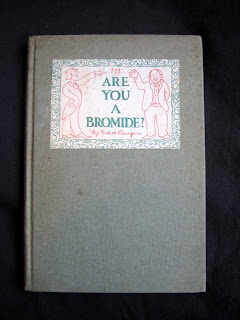 The title of this week’s book jumped out at me during an auction several months ago. It’s not particularly rare, but it struck me as bizarre enough to warrant adding it to my collection.

Are You a Bromide? was the work of American humorist Frank Gelett Burgess (1866-1951). It first appeared as the essay “The Sulphitic Theory”, published in the April 1906 issue of the literary magazine The Smart Set, and was first printed in book form by Ess Ess Publishing in October 1906. The copyright was then held by B. W. Huebsch (better known as the American publisher of James Joyce and D. H. Lawrence). Subsequent editions of Are You a Bromide? appeared in November and December 1906, February 1907, and June 1907. My copy is of this fifth printing, in June 1907. 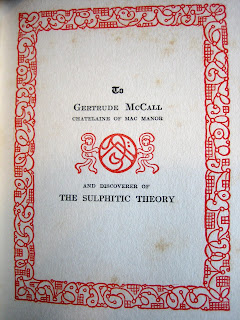 The full title of this piece of classic early twentieth-century humor is Are You a Bromide? Or, The Sulphitic Theory: Expounded and Exemplified According to the Most Recent Researches into the Psychology of Boredom, Including Many Well-Known Bromidians Now In Use. Burgess dedicated his book to one “Gertrude McCall” (not sure who she is), whom he credits in his typical ridiculous way as “Chatelaine of Mac Manor and Discoverer of The Sulphitic Theory”.

Burgess (below) was a native New Englander who moved to San Francisco to be a part of that city’s growing bohemian scene in the early 1890s. He gained fame as a humorist, illustrator, and editor of the magazine The Lark. 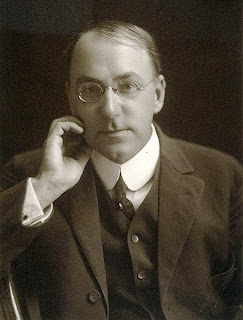 Perhaps his most well known writing is “The Purple Cow” (1895), a bit of verse used by generations of English teachers as the classic example of “nonsense verse”:

I never saw a purple cow
I never hope to see one;
But I can tell you, anyhow,
I'd rather see than be one!

The poem was immensely popular in Burgess’s time and he spent much of his following career trying to escape from its shadow. Also of note is Burgess’s role in advancing the marketing of books by coining the term “blurb”, which he defined as “a flamboyant advertisement” -- he used the term as part of a flashy advertisement at the front of the first edition of Are You a Bromide?, in which a “Miss Belinda Blurb” is seen yelling at the potential buyer. Sadly, this historic ad is not part of the fifth edition. 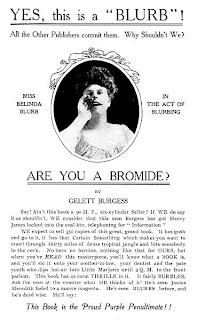 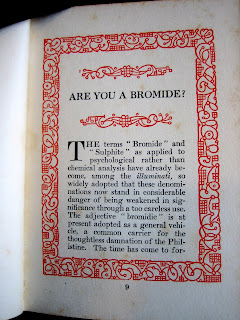 Besides these activities, Burgess wrote the successful children’s book series (and associated comic strip) The Goops (1900-1951). He once held the record for the most synonyms for “drunkenness” (surpassed in 2009 by Paul Dickson’s Drunk: The Definitive Drinker’s Dictionary). Unrelated to these activities (probably) he’s credited with founding the first Boys and Girls Club west of the Mississippi.

Are You a Bromide? is a satire of the many pseudo-psychology books that flooded the early twentieth-century book market following in the wake of Freud’s influential theories. Many of these are predicated upon simplistic and wholly manufactured binaries, rather than nuanced scientific study; in that vein, Burgess makes his book a treatise about identifying the “Bromide” and the “Sulfide”. The “Bromide” is described thus: 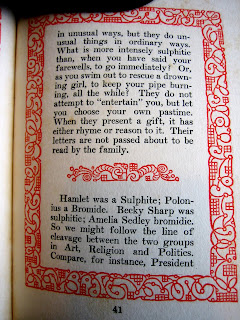 In this our world the Bromides constitute, alas! by far the larger group. In this, the type resembles the primary bodies or other systems of classification, such as the Philistines, the Conservatives, the Bores and so on, ad nauseam. The Bromide does his thinking by syndicate. He follows the main traveled roads, he goes with the crowd. In a word, they all think and talk alike--one may predicate their opinion upon any given subject. They follow custom and costume, they obey the Law of Averages. They are, intellectually, all peas in the same conventional pod, unenlightened, prosaic, living by rule and rote. They have their hair cut every month and their minds keep regular office hours. Their habits of thought are all ready-made, proper, sober, befitting the Average Man. They worship dogma. The Bromide conforms to everything sanctioned by the majority, and may be depended upon to be trite, banal and arbitrary. [17-8] 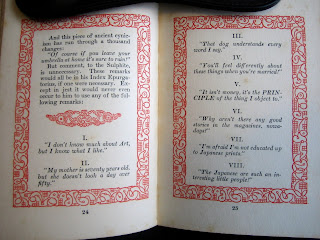 This is, of course, social satire dressed up in the then-topical rhetoric of psychiatry; modern self-help books, that attempt to categorize people by personality “type”, are no different. In addition to defining and giving examples of “bromidic” people, Burgess offers sample quotations of things Bromides are likely to say. He also breaks down the two categories into gradations and subcategories, gives their histories, and even applies the terms to things beyond people (for example, vegetables). 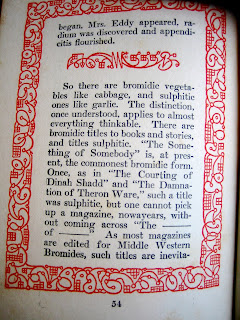 The book is bound in gray paper-covered boards. An illustrated title appears on the front. Throughout an ornate red border decorates each page and red devices of different types -- designed by Burgess himself -- separate the various sections. Excluding an unpaginated front flyleaf and back flyleaf, it runs [1-8] 9-63. Frequent foxing appears throughout, but it is otherwise in good condition.

On the recto of the front fly there was once a pencil inscription that is now either erased or faded to the point of illegibility. The book bears two other signs of its provenance. The first is a bookseller’s sticker in the lower inside corner on the inside of the back cover. The sticker is for the firm Belknap & Warfield, a stationer and, for a while, publisher based in Hartfield, Connecticut around the turn of the century. 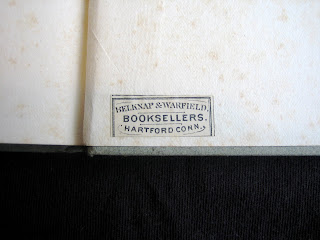 The other piece of provenance is a bookplate on the recto of the front flyleaf. The plate shows two ducks taking flight over a woodland pond and bears the words “Ex Libris Forrest Gracy”. Gracy was a resident of my neck of the woods -- western Massachusetts -- living in West Hawley. He was born on June 12, 1923 and died at the age of eighty-five on May 27, 2009, a resident of the Cozy Corner Nursing Home in Sunderland. 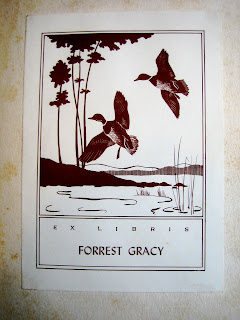 His obituary from the Greenfield Recorder paints a picture of a contented, sustainable, and intelligent rural life:

Mr. Gracy was born in Canton, Conn., June 12, 1923, the son of Byron and Ruth (Vining) Gracy. He attended Canton High School and was a WWII veteran, having served for three years as a U.S. Marine in the South Pacific.

Mr. Gracy was a great naturalist, gardener and woodsman who loved tending his gardens and forest on the Chickley River in West Hawley, where he lived self-sufficiently for many decades. He loved opera and classical music, was an avid reader and also enjoyed writing. He had been a machinist by trade.

Though they may not have known Mr. Gracy by name, many residents of West County recognized him as the old gentleman who rode his bike along Route 8A and the Mohawk Trail between Charlemont and Greenfield on his trips to fetch supplies and services away from his beloved Chickley River hollow. Mr Gracy was a thoughtful, gentle, solitary man who lived respectfully on the land and who was admired and respected by all who had the opportunity to know him.

Mr. Gracy was predeceased by his ex-wife, Sarah Jane (Adams) Gracy of Rowe, with whom he maintained a life-long friendship. Survivors include his sister Beatrice Gracy Sabatino of Bridgeport, Conn,; a niece Elaine Ruth Sabatino of Soquel, Calif.; and a step-daughter Marianna Erho of Brownington, Vt. 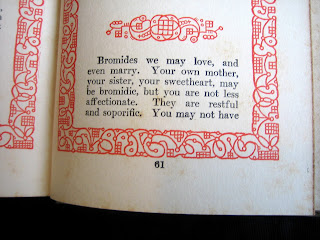 The auction at which I acquired this book -- held in Amherst, Massachusetts -- included other papers and ephemera from the Gracy estate (his two tracts of property in Hawley were sold to a couple from the nearby city of Northampton). Amongst the papers were many books -- as the obituary notes, Gracy must have been quite the “avid reader” -- and many written documents, ranging from journals and poems (he “enjoyed writing”) to several lots of correspondence between him and his mother, Ruth, during his time overseas in World War II. His love of nature certainly explains the bucolic waterfowl scene on his bookplate.

Gracy’s obituary gives a brief synopsis of the man -- an abstract, if you will. But walking through that auction and seeing both his own writings and the kinds of books he once owned, read, and cherished, filled out that abstract with nuance, complexity, and -- as my copy of Are You a Bromide? attests -- a bit of quirky humor as well.

Email ThisBlogThis!Share to TwitterShare to FacebookShare to Pinterest
Labels: Are You a Bromide, B. W. Huebsch, Belknap and Warfield, blurb, Forrest Gracy, Gelett Burgess, Gertrude McCall, sulfitic theory, The Goops, The Lark, The Purple Cow, The Smart Set, West Hawley